Analysts have tried for years to recover the famous 18½ minute gap from Richard Nixon’s taped conversation with Bob Haldeman a few days after the Watergate break-in.  No dice.  So far, it just doesn’t look possible.

But Haldeman also took notes of that conversation.  The pages that correspond to the gap appear to have been deep-sixed at the same time the tape was erased, 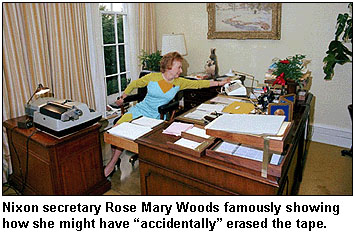 but a Watergate buff named Phil Mellinger, a former NSA systems analyst, has proposed a way to recover the notes anyway.  David Corn has the news:

Mellinger had an idea: electrostatic detection analysis. That’s a proven forensic technique used to capture indentations and impressions on a piece of paper—such as the marks made on a page in a pad by a pen writing on the pages above it.

….Days after his eureka moment, Mellinger emailed David Paynter, the archivist in charge of the Watergate records, requesting that the Archives submit the two pages of Haldeman notes to this procedure….After he filed his request, a document forensics expert at the Archives examined the Haldeman notes, found indented writing on the second page, and concluded that electrostatic detection analysis could work on this document, according to Paynter. So Paynter recommended to higher-ups at the Archives that the Haldeman notes be tested. At press time, Paynter was awaiting the green light from his superiors. “The reason we’re going forward with this,” Paynter says, “is that we’ve already tried with the tape itself. Here’s another avenue to shed light on an important episode in history. It’s very exciting.”

If they successfully recover the notes, maybe we can turn them back into tapes by having William Shatner do a dramatic reading?