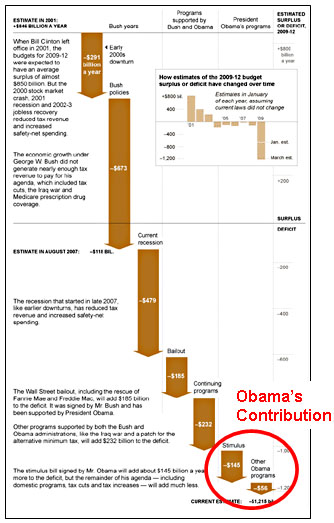 That is: It Was President Bush, Stupid.  That’s just a thumbnail on the right, but you can click on it to see the full-size version.  Here’s Leonhardt on how an $800 billion surplus turned into a $1.2 trillion deficit over the past eight years:

You can think of that roughly $2 trillion swing as coming from four broad categories: the business cycle, President George W. Bush’s policies, policies from the Bush years that are scheduled to expire but that Mr. Obama has chosen to extend, and new policies proposed by Mr. Obama.

The first category — the business cycle — accounts for 37 percent of the $2 trillion swing. It’s a reflection of the fact that both the 2001 recession and the current one reduced tax revenue, required more spending on safety-net programs and changed economists’ assumptions about how much in taxes the government would collect in future years.

About 33 percent of the swing stems from new legislation signed by Mr. Bush. That legislation, like his tax cuts and the Medicare prescription drug benefit, not only continue to cost the government but have also increased interest payments on the national debt.

Mr. Obama’s main contribution to the deficit is his extension of several Bush policies, like the Iraq war and tax cuts for households making less than $250,000. Such policies — together with the Wall Street bailout, which was signed by Mr. Bush and supported by Mr. Obama — account for 20 percent of the swing.

Everybody except the blowhards on TV seem to understand this already.  It’s pretty simple stuff.

Now, Leonhardt also points out that inherited or not, Obama hasn’t yet provided any credible plan for reducing federal deficits in the long term.  This is true, and eventually he’s going to have to.  But since the inescapable answer includes higher taxes, he first has to turn around at least a few of the diehard tax jihadists in both the Republican Party and the conservative precincts of his own party.  That might take a while.