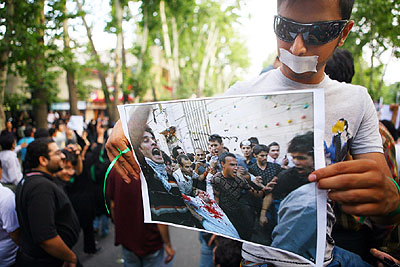 Conventional wisdom says that Mahmoud Ahmadinejad’s main base of support was in Iran’s small towns and rural villages while Mir-Hossein Mousavi’s support came mainly from young people and urban areas.  Eric Hooglund, an expert in rural Iran, casts some doubt on this:

Take Bagh-e Iman, for example. It is a village of 850 households in the Zagros Mountains near the southwestern Iranian city of Shiraz. According to longtime, close friends who live there, the village is seething with moral outrage because at least two-thirds of all people over 18 years of age believe that the recent presidential election was stolen by President Mahmoud Ahmadinejad.

….Carloads of villagers actually drove to Shiraz to participate in the massive pro-Mousavi rallies that were held on the three nights prior to the balloting. And election-day itself was like a party in Bagh-e Iman. Many people openly announced their intentions to vote for Mousavi as they cheerfully stood in line chatting with neighbors, and local election monitors estimated that at least 65 percent of them actually did so. “Although some probably really voted for [Ayatollah Mehdi] Karubi, who also is a man of the people,” said election monitor Jalal.

….By Saturday evening, the shock and disbelief had given way to anger that slowly turned into palpable moral outrage over what came to be believed as the theft of their election. The proof was right in the village: “Interior Ministry officials came from Shiraz, sealed the ballot boxes, and took then away even before the end of voting at 9 pm,” said Jalal. In all previous elections, a committee comprised of representative from each political faction had counted and certified the results right in the village. The unexpected change in procedures caught village monitors off guard, as it did everywhere else in the country.