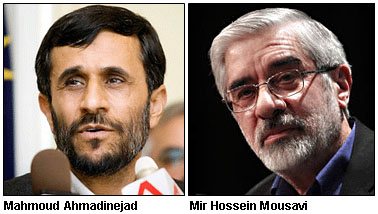 I don’t have any special comment about the upcoming Iranian election pitting hardline incumbent Mahmoud Ahmadinejad against moderate reformer Mir Hossein Mousavi, but I thought Marc Lynch’s musing was worth passing along.  Here it is:

The Iranian election has already captivated the Arab public sphere — it has been all over the headlines and the TV stations. I imagine that many of the Arabs who see democracy as an important and positive issue find this Iranian election inspiring (as they did Khatemi’s 1997 campaign). The Arab public may regard a Mousavi victory as the same kind of opportunity to rethink relations with Iran as Obama’s victory offered for relations with the United States. Arab leaders may find it harder to mobilize opposition to Iran with the seemingly reasonable Mousavi in office than with the cheerfully inflammatory Ahmedenejad.

….Of course, if Ahmedenejad wins, the reverse effect may take hold. When George W. Bush defeated John Kerry in 2004, a very wide swathe of Arab public opinion concluded that this meant that the American people really did bear responsibility for Bush’s unpopular policies. If the U.S. is really a democracy, they asked, then didn’t Bush’s victory mean that his war on terror and invasion of Iraq really did represent the American popular will? If Ahmedenejad wins, the same dynamic may hit Iran in the Arab world: the Iranian people had the chance to correct their policies, and chose to continue as they were. That might lead to a hardening and deepening of anti-Iranian sentiment, at least among elites and leaders.