Torture apologists are fond of telling us that “only” three 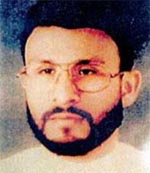 prisoners have ever been waterboarded.  Two of those three were Abu Zubaida and Khalid Sheik Mohammed.  Today, documents released in response to an ACLU lawsuit shed some new light on both of them:

An al-Qaeda associate captured by the CIA and subjected to harsh interrogation techniques said his jailers later told him they had mistakenly thought he was the No. 3 man in the organization’s hierarchy and a partner of Osama bin Laden, according to newly released excerpts from a 2007 hearing.

“They told me, ‘Sorry, we discover that you are not Number 3, not a partner, not even a fighter,’ ” said Abu Zubaida, speaking in broken English, according to the new transcript of a Combatant Status Review Tribunal held at the U.S. military prison in Guantanamo Bay, Cuba.

….Mohammed, who was waterboarded 183 times […] said he lied in response to questions about bin Laden’s location.

I’m exaggerating when I say that this is really “new” information, but it is more extensive information than we’ve had before.  And it’s not exactly a great advertisement for either the efficacy or the morality of waterboarding.  Adam Serwer has more here.