Why did Barack Obama reverse course a couple of weeks ago and decide not to hand over those additional detainee abuse photos that the ACLU is fighting to get released? 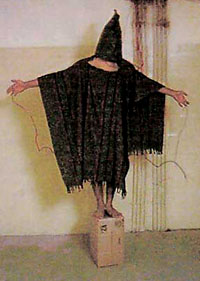 When U.S. officials told Maliki, “he went pale in the face,” said a U.S. military official, who along with others requested anonymity because of the matter’s sensitivity.

The official said Maliki warned that releasing the photos would lead to more violence that could delay the scheduled U.S. withdrawal from cities by June 30 and that Iraqis wouldn’t make a distinction between old and new photos. The public outrage and increase in violence could lead Iraqis to demand a referendum on the security agreement and refuse to permit U.S. forces to stay until the end of 2011.

Maliki said, “Baghdad will burn” if the photos are released, said a second U.S. military official.

A U.S. official who’s knowledgeable about the photographs told McClatchy that at least two of them depict nudity; one is of a woman suggestively holding a broomstick; one shows a detainee with bruises but offered no explanation how he got them; and another is of hooded detainees with weapons pointed at their heads.

If the ACLU wins its suit, they better hope this is just a bunch of spin from administration sources trying to make the boss look good.