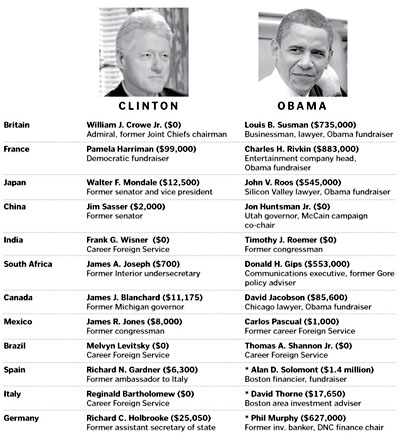 In the Washington Post today, Al Kamen compares Barack Obama’s habit of doling out plum ambassadorships to big campaign donors with Bill Clinton’s squeaky clean record of ignoring the money and instead choosing people “with experience in public policy.”  Bob Somerby is amused by this sudden rejuvenation of Clinton’s reputation:

For years, Kamen’s coven kept insisting that Clinton’s fund-raising was corrupt — that virtually everything was up for sale, given the president’s corrupt love of cash. In the case of the Lincoln Bedroom, the coven faked especially hard — and no one embarrassed itself more than Kamen’s own newspaper. In one especially sad example, the Post belatedly added Chelsea’s Clinton’s slumber party guests to the list of Lincoln Bedroom overnight guests, thereby driving up the numbers and heightening the sense that the Clintons had been misbehaving. It’s hard to get much sicker than that, but Kamen’s coven was up to the task. A few years later, Kamen himself reviewed a Christmas card — on Christmas Eve! He thought he saw character problems.

Without going into obsessive detail, more than a decade has passed since we heard — and heard, and heard, then heard some more — about Bill Clinton’s vile corruption when it came to campaign fund-raising. (We also heard the coven’s gong-show tales about that Buddhist temple.) More than a decade has passed—and have you seen anyone do any work on all the corruption this coven alleged? By now, the coven has had plenty of time to detail and document its big loud-mouthed charges. Have you see anyone produce the book — or even the magazine piece — which documents the way Bill Clinton actually sold off the White House?

And what happened to our most recent president emeritus in all this, anyway?  Who did he send to Britain and Japan?  Click the link for the answer.