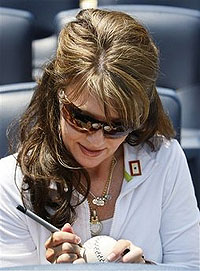 A few days ago David Letterman told a crass joke about Bristol Palin.  It was, as Paul Farhi points out, similar to a million other crude jokes told about the Palin family over the past year.  But this time Sarah Palin went ballistic and last night Letterman apologized. James Joyner comments:

A week ago, I wrote a post titled Letterman Palin Jokes Cross the Line, both excoriating Letterman for his remarks but defending him from the ridiculous charge that he was some sort of pervert who liked to joke about 14-year-olds.  Since then, Letterman first explained his remarks and subsequently apologized for them profusely. And rightly so.

But I have a hard time believing Palin was legitimately confused days later about the target of the joke and, in light of the previous jokes told about Bristol’s out-of-wedlock pregnancy, particularly outraged at this one.   Instead, she took advantage of the initial media brouhaha over the Willow/Bristol confusion and made a big spectacle, hoping to both remove the Bristol mess out of the realm of legitimate ridicule and reframe herself as an aggrieved party rather than a rather cartoonish figure.

Letterman may have gone over the line, but that plainly wasn’t what bothered Palin.  She was just looking for some free publicity, and getting her supporters worked up over a supposed insult from a dissolute member of the East Coast liberal elite played directly into her standard class resentment schtick.  It shows impressive political instincts, in a way.  It’s a good thing she’s not as ruthless, smart, or tireless as Richard Nixon or we might all be in real trouble.

In related news, check out the Sarah Palin shrine at the New York Stock Exchange.