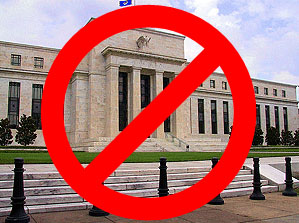 I’m not really sure if the federal government needs a “systemic risk regulator.”  I just don’t have a strong opinion about whether this is the right way to think about managing credit bubbles.  But a couple of days ago I said that if we do have such a thing, it shouldn’t be the Fed.  Instead, “you want to give the authority to an agency that’s institutionally dedicated to reducing risk and considers it a primary task.  That ain’t the Fed.  It’s just going to get buried in the bureaucracy and forgotten there.”  Tyler Cowen responds:

Assuming we are going to do it, I think it has to be the Fed, whether we like it or not.  It’s the Fed who is the fireman with the awesome power to print money, move markets, lend to the banking system on a large scale, and now even conduct fiscal policy, all without Congressional approval.  Our textbooks speak of the Fed as a lender of last resort but very often it is the lender of first resort too.

Now, this might be right.  It’s possible that we just don’t have any choice.  But at the risk of a bit of incoherence, let me offer an alternative.

It’s true that the Fed is the agency with the brute force to make things happen in an emergency.  But I’m not sure that’s the relevant thing to think about.  What we want is some kind of body that works to prevent emergencies.  That requires credibility and influence, but it doesn’t necessarily require a trillion dollar balance sheet.

I guess the model I have in mind here is the Congressional Budget Office.  The CBO is unknown to most people, but despite its small size and low public profile it has a remarkable amount of power.  This power comes from two sources.  First, it has institutional credibility.  I honestly don’t know how it’s managed to keep this credibility in the face of what must be enormous partisan pressure, but it has.  It’s widely considered an honest broker and its budget estimates are taken seriously by everyone.

Second, although the CBO itself doesn’t have a huge staff or control of a huge budget, Congress has agreed to abide by its cost estimates for legislative programs.  This means that CBO analysts have considerable indirect control over a lot of money.  And in Washington, money equals power.

So my question is: could we create an agency like the CBO, but charged with monitoring systemic risk in the financial system?  It would have to be nonpartisan and independent.  It would need to have risk management baked into its DNA as its primary mission, rather than being #7 on a list of ten goals — with everyone knowing that only the top three get any real attention anyway.  Its director would need the kind of credibility that makes people listen when he warns that other agencies are allowing too much giddiness on Wall Street.  And, finally, it would need the right mix of authority, either direct or indirect, that’s enough to force people to take it seriously when its mere credibility isn’t quite enough.

But here’s the incoherent part: I’m not quite sure how you’d construct such an agency or what authority might be sufficient for it to do its job without getting it hopelessly at odds with other regulatory agencies.  One way or another, though, I feel that giving this mission to the Fed is simply a waste of time.  Right now, virtually every impulse — both at the Fed and in the private sector — works in the direction of either ignoring credit bubbles or actively cheering them on.  If we’re going to put a brake on this, we need to think about institutional priorities and balances of power, and figure out what it would take to get systemic risk established as a bureaucratic turf with a built-in constituency dedicated to protecting it over the long term.

Smart people, help me out.  What should this look like?  Or is it foolish to think this is even possible?