I guess I shouldn’t really be surprised at anything Andy McCarthy says these days, but he somehow manages to surprise me anyway with some regularity. 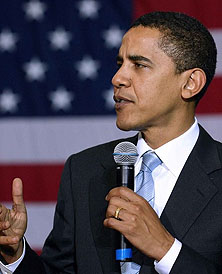 Here he is telling us the real reason Barack Obama has been restrained in his public statements about Iran:

The fact is that, as a man of the hard Left, Obama is more comfortable with a totalitarian Islamic regime than he would be with a free Iranian society.

Believe it or not, it goes downhill from there: McCarthy thinks Obama actually wanted to make a statement supporting the mullahs, but that wouldn’t have gone over well with Joe Sixpack.  So he did the next best thing and stayed quiet.  Still, “Obama has a preferred outcome here, one that is more in line with his worldview, and it is not victory for the freedom fighters.”

Also worth noting is that in the spirit of true paranoids everywhere, McCarthy manages to twist his theory so that it explains all of Obama’s actions, both past and future.  No matter what Obama does — whether he speaks up or not — it will be in service of his overarching hard Left ideology and the volcanic anger and resentment that controls his life.

Somebody really needs to have a little chat with Rich Lowry.  I don’t expect a lot from National Review these days, but McCarthy’s public descent into madness isn’t pretty to watch and doesn’t do the magazine any favors.  Maybe it’s time to ask him to work out his issues a little more privately.

UPDATE: I missed this the first time around, but to his credit, Lowry does respond to McCarthy here.  Remarkably (or not, perhaps), McCarthy then digs himself in even deeper here.  “I detect in your post a sense that I’m this close to the fringe,” he says.  Well, there’s no need to sense what I’m saying in my post, Andy.  You are batshit crazy.