“Neda,” it turns out, is Neda Agha-Soltan, 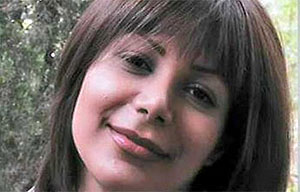 a 26-year-old native of Tehran who was shot dead during Saturday’s clashes at Azadi Square.  Borzou Daragahi of the LA Times reports from Tehran:

Security forces urged Neda’s friends and family not to hold memorial services for her at a mosque and asked them not to speak publicly about her, associates of the family said. Authorities even asked the family to take down the black mourning banners in front of their house, aware of the potent symbol she has become.

But some insisted on speaking out anyway, hoping to make sure the world would not forget her. Neda Agha-Soltan was born in Tehran, they said, to a father who worked for the government and a mother who was a housewife. They were a family of modest means, part of the country’s emerging middle class who built their lives in rapidly developing neighborhoods on the eastern and western outskirts of the city.

Like many in her neighborhood, Neda was loyal to the country’s Islamic roots and traditional values, friends say, but also curious about the outside world, which is easily accessed through satellite television, the Internet and occasional trips abroad….But she was never an activist, they added, and she began attending the mass protests only because of a personal sense of outrage over the election results.

“She was a person full of joy,” said her music teacher and close friend Hamid Panahi. “She was a beam of light. I’m so sorry. I was so hopeful for this woman.” The Lede has more, including a report that Basij militia members and police officers broke up a memorial service for Soltan on Monday by violently beating and arresting the protesters.