In last week’s column, Martin Wolf warned that bushels of new regulations won’t save us from another banking crisis.  The problem, he said, is that in a highly leveraged business it makes perfect sense for shareholders (and therefore management) to take enormous risks, and nibbling around the regulatory edges won’t change that.  But what will?  He didn’t really say, prompting me to comment, “Perhaps this column was a season finale cliffhanger and we have to wait until next week for the mind blowing conclusion?”

I guess it really was, after all, because this week we get Wolf’s answer:

If institutions are too big and interconnected to fail, and no neat structural solution can be identified, alternatives must be found: much higher capital requirements and greater attention to liquidity are the obvious ones. At present, 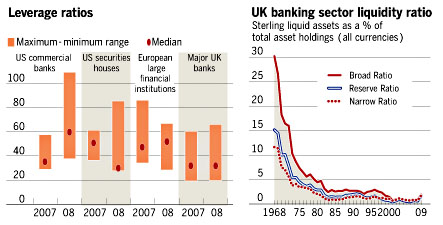 big financial institutions operate with next to no capital: in the US, the median leverage ratio of commercial banks was 35 to 1 in 2007; in Europe, it was 45 to 1 (see chart). As I noted last week, this makes it rational for shareholders to “go for broke”, with the results we have seen. Allowing institutions to be operated in the interests of shareholders, who supply just 3 per cent of their loanable funds, is insane. Trying to align the interests of management with those of shareholders is then even crazier. With their current capital structure, big financial institutions are a licence to gamble taxpayers’ money.

So how much capital makes sense for systemically significant institutions? “Much more than today” is the answer. Moreover, the required capital must also not be risk-weighted on the basis of banks’ models, which are not to be trusted. Shareholders’ funds should make up a minimum of 10 per cent of capital. In the US, it used to be far higher.

….Within a far better capitalised financial system, it would also be relatively easy to operate a “macroprudential” regime, with the required capital rising during booms and falling during busts. Again, the bigger the stake of shareholders, the less one would worry if the rewards of managers were aligned with them.

Well, that turned out to be distinctly non-mind blowing, didn’t it?  Regulate leverage wherever, whenever, and in whatever form it appears.  But though Wolf’s answer may have been a bit anticlimactic, at least it has the virtue of being right.

The big remaining question, though, is: how?  How do you mandate higher capital requirements in a way that’s likely to be robust?  As Wolf says earlier in the column, “‘Never again’ might be too much to ask. But ‘not for a generation’ is essential.”  So how do we build a system of stronger capital requirements likely to persist around the globe for at least a generation?  I haven’t yet heard a really persuasive answer to this, and unfortunately, at this point it’s not clear that anyone is even trying very hard to figure it out.  There are just too many people who want to believe that the crisis is over and we can go back to business as usual with just a bit of minor deck chair rearranging.  Ten years from now we’ll pay the price for this.