The New York Times: “Estimates of the death toll in clashes [Saturday] between security forces and demonstrators protesting what they called a fraudulent presidential election varied. State television said that 10 had died, while radio reports said 19 people had been killed.  Major streets and squares of Tehran were saturated with police and Basij militia forces. 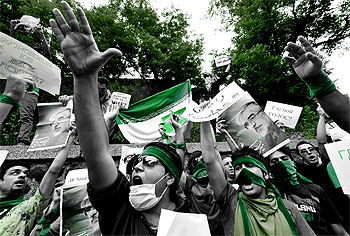 There were reports of scattered confrontations with the police, but there was no confirmation of any new injuries Sunday evening.”…..LA Times: “There was uncertainty over what might unfold next. Would protesters rally again despite the government’s blunt warnings it would use force to clear the streets, as they did Saturday? Or were both sides recalibrating strategies to keep the nation from sliding into further chaos?”

Juan Cole: “The regime has arrested Faezeh Hashemi Rafsanjani, daughter of the former president, who spoke at a pro-Mousavi rally, along with 4 other members of that family. This step is typical of an old Iranian ruling technique, of keeping provincial tribal chieftains in check by keeping some of their children hostage at the royal court.”

Roger Cohen reporting from Tehran: “I don’t know where this uprising is leading. I do know some police units are wavering.”…..Shahram Kholdi: “There is a division in the ranks of the police, which in a way is a good sign. Two close friends […] were stopped at a check point and their car trunk was full of posters and green bands. The constables took them to their immediate commander who confiscated all the material and ordered them to be arrested. However, as they were taken to another check point where the district commander was, he overruled his superiors […] As they got in the car to leave the station, the district commander told them that they have to be extra careful and told them Movaffagh Bashid (meaning roughly ‘good luck’).”…..Andrew Sullivan: “Just watch this pitched battle in the streets between a crowd and the riot police (via BBC Farsi). And watch it to the very end, as the police suddenly turn tail and run.”

Chatham House on irregularities in the vote: “The massive increases from 2005, the collapse of regional variations, and the absence of any clear correlation between increases in turnout and increased support for any candidate on their own make the results problematic.”…..BBC: “Iranian authorities have asked the BBC’s correspondent in Tehran to leave the country within 24 hours.”

Al Arabiya: “Iran’s religious clerks in Qom and members of the Assembly of Experts, headed by former President Mahmoud Ahmedinejad, are mulling the formation of an alternative collective leadership to replace that of the supreme leader, sources in Qom told Al Arabiya on condition of anonymity.”…..The Lede: “More splintering among Iran’s clerics is reported by Reuters.”…..Fareed Zakaria: “Something very important has been laid bare in Iran today — legitimacy does not flow from divine authority but from popular support.”…..Bill Clinton: “Basically, this is about a government trying to deny the modern world.”