The economy continues to suck:

Retail sales decreased by 0.4% compared to the prior month, the Commerce Department said Wednesday. Economists expected an increase of 0.1%.

Sales in March were revised down, decreasing 1.3% instead of 1.2% as previously reported. Sales rose in January and February, after sliding six straight months.

So how long is this going to last? My rough guess is this: one way or another, the U.S. savings rate has to increase enough that we not only get rid of our trade deficit, but start to reverse it. 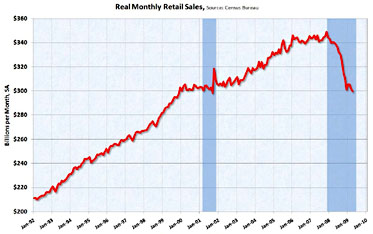 That’s going to require a drop in domestic consumption on the order of 10% or so over the medium term. This can be masked somewhat by tax cuts and government stimulus and fluctuations in the exchange rate, but eventually consumption has to come down.

And it has!  The chart on the right, from Calculated Risk, tells the story: retail sales have dropped something like 12% in the past year or so.  That doesn’t mean our trade deficit has reversed or anything — that’s not likely to happen for quite a while — but it does mean that personal consumption might be getting close to sustainable levels now.  Maybe.  I wouldn’t bet the ranch on it, but if you’re looking for some slightly less grim news than usual, this is it.