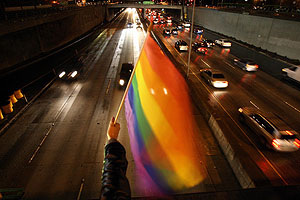 Should a Baptist minister be required to marry a gay couple?  Of course not.  Should an adoption service run by the Catholic church be required to place children in gay households?  Probably not.  Andrew Sullivan asks the obvious followup:

But how far do you go? Should a Catholic caterer, for example, be able to refuse to provide food for a second marriage? My own view is: yes. But then I’m a libertarian in many ways. I see protecting religious freedom in the civil sphere as a core principle. And by exposing such religious prejudice so baldly, and allowing the market to disadvantage the bigoted, we may even help jump-start the conversations that will eventually persuade people that they’re wrong.

God knows, if Andrew is OK with this, I suppose I should be.  And I think there’s a strong case to be made that in practice this might not be a big deal.  After all, do same-sex couples really want to hire photographers and caterers who make it clear they loathe them?  Probably not.  But then, you might have asked the same thing 50 years ago: do Southern blacks really want to eat at lunch counters where they obviously aren’t welcome?  As it turned out, yes.

This has become the latest front in the gay marriage wars, and I’d be careful about ceding too much ground here.  Laws guaranteeing religious freedom are fine as long as they cover actual religious practice.  But once they start covering bog ordinary commercial establishments that don’t have even a tenuous connection to a church and want to discriminate merely because they don’t like gays — well, that’s a line that gets pretty hard to draw pretty fast.   What’s worse, in some places it’s a line that would essentially take over entire towns.  If a caterer can refuse to sell me a wedding cake just because I’m gay — despite state law that would normally outlaw such discrimination — can a landlord refuse to rent me and my newly married partner an apartment despite fair housing laws saying he has to?

I haven’t thought this through in a lot of detail, but I’m uncomfortable extending these “religious freedom” exemptions beyond actual religious establishments.  I’m all for compromise that turns down the volume on the culture wars, but once these laws are in place they run the risk of cementing bigoted practices in place for years or decades longer than they’d otherwise survive.  Count me as a skeptic that, in the long run, this is workable.