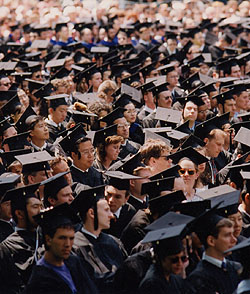 Robert Reich points out today that the average college graduate today has to repay $22,000 in student loans, a number that’s like to continue skyrocketing as university costs go up and state funding goes down.  This forces a lot of grads to shun good works and instead head straight to the highest paying job they can find:

So here’s my proposal: Any college student can get full funding from the government, with only one string attached. Once they’ve graduated and are in the work force, they pay 10 percent of their incomes for the first 10 years of full-time work into the same government fund they drew on to finance their college education.

Now maybe that formula will need to be adjusted up or down to cover all the costs. And surely some people will game the system as they do every other one. But the essential idea is that linking the costs of college to subsequent wages makes college affordable to everyone.

I kind of like this idea.  Maybe instead of a flat percentage it’s a sliding scale that starts at 2% and goes up to 20% to take account of rising salaries as grads gain job experience.  Or something.  Sure, you could still game the system, but you’d have to pretty damn dedicated to avoid a job initially because of a measly 2% charge and then keep it up for ten years.

The counterargument, of course, is that college is valuable.  It generally attracts people who already have a lot of advantages, and then provides them with a degree that enhances their earning power even more.  Why should they be subsidized at all?

It’s a compelling argument.  In the end, though, I think society benefits from attracting as many kids into college as possible.  I’m no fan of the proposition that we should try to send everyone to college, but I do think we benefit by making it as attractive as possible to the largest feasible set of students who can take advantage it.  Keeping the cost manageable is part of that.