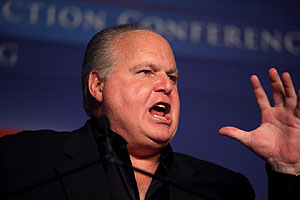 These are not people who can count on the angry anti-Obama minority to win elections for them. And John Boehner has little in the way of favors to hand out, while Nancy Pelosi is in a position to give them something to take back to their district at home in exchange for acquiring a veneer of bipartisan cover. And yet not a one of them — nor even a single House Republicans nationwide — could be induced to vote for the Obama Recovery Act or the Obama budget plan. It’s impressive. My best guess is that the Club for Growth has really put the fear of God into everyone, but maybe there’s more to it.

There’s another side to this too.  Basically, these votes are freebies: both the stimulus bill and the budget plan were obviously going to pass the House by wide margins, so Republican votes really didn’t matter.  This means GOP members of Congress could cast a base-pleasing no vote without having to worry that their vote might actually derail anything and come back to haunt them.  Being utterly out of power may be a bummer, but I suppose it has its occasional bright spots too.