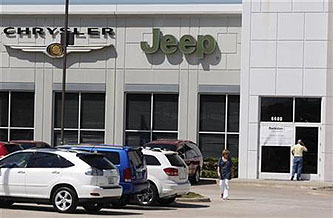 The latest firestorm in the conservosphere concerns Chrysler’s shutdown of a quarter of its dealer network.  Capitalism at work, you say?  More like crony capitalism, my friends:

Is the Obama administration punishing Chrysler dealers for their politics? A preliminary analysis by Doug Ross suggests that could be the case.

….[Ross] started with the list of Chrysler and Dodge dealerships which will be closed as a result of the government-mandated Chrysler bankruptcy plan. Then he marked those dealers whose names appeared more than once in the list. Next, he checked which ones contributed to political campaigns. Every one of them had donated almost exclusively to Republican candidates. Ross found only one dealer on the closing list who had contributed to the Obama campaign, a $200 donor in Waco, Texas.

….Shades of the Nixon enemies list, we first saw signs that Obama wasn’t above playing hardball with his political opponents during the active campaign.

Nate Silver puts his high-powered statistical brain to work on his puzzler and concludes….wait for it….that there’s no there there.  “It turns out,” he says, “that all car dealers are, in fact, overwhelmingly more likely to donate to Republicans than to Democrats — not just those who are having their doors closed.”  Big surprise.

So that’s that.  But I want to defend Doug Ross and the RedState folks who publicized this anyway.  I’m serious.  Sure, it turned out that nothing was going on, but you know what?  If George Bush’s administration had gone down this road, I’d want someone to watch them like a hawk too.  The crackpotty writing may be a source of amusement, and I have no doubt that these guys are, as usual, going to embarrass themselves in an Ahab-like quest to prove that Obama really did force Chrysler to target Republican donors — with the lapdog mainstream media covering up for him because, you know, that’s what they do.  But even so, I say dig away.  Even blind squirrels find nuts occasionally, and if the government is going to be running car companies, then this is exactly the kind of thing people should be watching out for.  That’s what opposition parties are for.

As Bob Somerby reminds us frequently, the real damage to Bill Clinton didn’t come from the crackpots and their conspiracy theories.  It came from the mainstream media eagerly picking up on these theories even when there was nothing there.  As long as modern-day Jeff Gerths hold their fire unless there’s some real smoke, we’ll be OK.