Why do houses cost so much today?  In the Wilson Quarterly, Witold Rybczynski writes that even when you adjust for inflation and home size, prices are still considerably higher today than they were 50 years ago.  There are two reasons, he says:

The first is Proposition 13, the 1978 California ballot initiative that required local governments to reduce property taxes and limit future increases, and sparked similar ­taxpayer-­driven initiatives in other states. Henceforth, municipalities were unable to 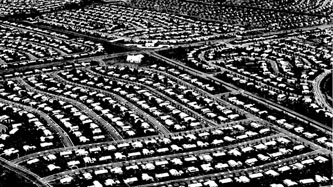 finance the ­up-­front costs of infrastructure in new communities, as they had previously done, and instead required developers to pay for roads and sewers, and often for parks and other public amenities as well. These costs were passed on to home buyers, drastically increasing the selling price of a house.

Interesting!  If Rybczynski is right, we now have lower taxes but higher house prices.  And perhaps that’s fair.  But it’s also a godsend for everyone who bought a house more than 20 years ago.  In California, it means that your original home price was low because taxes paid for the property improvements.  Then the high taxes that built your neighborhood were capped, which drove up the price of building new neighborhoods, and since housing is fungible it also drove up the price of existing homes like yours.  In other words: low price, low taxes, lots of appreciation.  That’s great news for all us baby boomers, but I’m afraid the Xers are paying the price.  Par for the course, isn’t it?  Someday you guys are going to figure out just how badly we’ve screwed you over and it’s going to be Soylent Green time.

(Rybczynski’s second reason is development restrictions that artifically lower the supply of housing.  Read the whole piece for more details.)