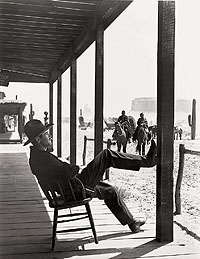 David Brooks says that if Republicans had learned the right lessons from watching Westerns, they’d be a little less interested in rugged individualism and a little more interested in community and civic order:

They would begin every day by reminding themselves of the concrete ways people build orderly neighborhoods, and how those neighborhoods bind a nation. They would ask: What threatens Americans’ efforts to build orderly places to raise their kids? The answers would produce an agenda: the disruption caused by a boom and bust economy; the fragility of the American family; the explosion of public and private debt; the wild swings in energy costs; the fraying of the health care system; the segmentation of society and the way the ladders of social mobility seem to be dissolving.

But the Republican Party has mis-learned that history. The party sometimes seems cut off from the concrete relationships of neighborhood life. Republicans are so much the party of individualism and freedom these days that they are no longer the party of community and order. This puts them out of touch with the young, who are exceptionally community-oriented. It gives them nothing to say to the lower middle class, who fear that capitalism has gone haywire. It gives them little to say to the upper middle class, who are interested in the environment and other common concerns.

I think this column suffers from Brooks’ usual weakness for extending metaphors beyond their useful life, but his central point is a pretty good one.  The American public is obviously in the mood for a little less cowboy capitalism and a little more stability, and there are both liberal and conservative ways of getting there.  Democrats obviously support the liberal path, and to compete the GOP needs to stop offering up its usual menu of non-answers and instead figure out a conservative way to tell the business community to behave itself, a conservative way to produce more clean energy, and a conservative way to genuinely address everyday healthcare concerns.  It’s not impossible, but the true-believer rump of the party wants nothing to do with it — and they’re suffering the consequences.  They could do a lot worse than to spend a little less time listening to Rush Limbaugh and a little more time listening to Brooks.