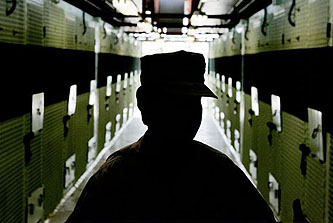 I never expected Barack Obama to be anything other than pragmatic and center left.  Still, I confess to feeling a little in the dumps lately over just how much he seems willing to bend and compromise on some key issues.  But then I read things like this:

In an abrupt shift, Senate Democratic leaders said on Tuesday that they would not provide the $80 million that President Obama requested to close the detention center at Guantánamo Bay, Cuba.

….The Senate majority leader, Harry Reid of Nevada, seemed to ramp up the concerns of Congressional Democrats, insisting during a news conference that lawmakers would never allow the terror suspects to be released into the United States….Pressed to explain if that meant they could not be transferred to American prisons, Mr. Reid said: “We don’t want is them to be put in prisons in the United States. We don’t want them around the United States.”

To repeat: I read things like this.  And I realize all over again just what Obama is up against.  His own party won’t support him against even the most transparent and insipid demagoguery coming from the conservative noise machine.  The GOP’s brain trust isn’t offering even a hint of a substantive case that the U.S. Army can’t safely keep a few dozen detainees behind bars in a military prison, but Dems are caving anyway.  Because they’re scared.  And then they wonder why voters continue to think that a party that can be bitch slapped so easily might be viewed as weak on national security.

But that’s the reality that Obama has to deal with.  Under the circumstances, I guess he’s not doing so badly after all.