The Sunni Awakening played a major role in the reduction of violence in Iraq in 2007 and 2008, as Sunni tribes that had been fighting the government turned their attention to fighting al-Qaeda in Iraq instead.  So how’s that working out?  In Anbar Province, Liz Sly of the LA Times reports that things look pretty hopeful:

“The Awakening is an economic and political entity now, and our strategy is financial and economic,” said Abu Risha, who has led the Awakening since his brother’s assassination in 2007….Here in Anbar province, birthplace of the Awakening movement, the Sunni Arab paramilitaries who turned their guns on fellow Sunni insurgents have become the government.

….It promises to be quite a transformation for a movement that started out in 2006 as a tribal uprising against the insurgents who had sought to impose a 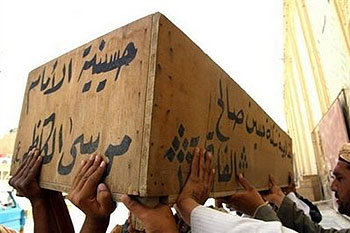 vicious interpretation of Islamic law on the western desert province. Photographs on Abu Risha’s wall show his slain brother, Abdul-Sattar, who founded the movement, dressed in robes, slung with bullets and surrounded by Kalashnikov-wielding militiamen.

In Baghdad and Mosul, however, the London Times reports that the news is grim:

A leading member of the Political Council of Iraqi Resistance, which represents six Sunni militant groups, said: “The resistance has now returned to the field and is intensifying its attacks against the enemy. The number of coalition forces killed is on the rise.”

The increase in attacks by such groups, combined with a spate of bombings blamed on Al-Qaeda, has had a chilling effect on the streets of Iraq. More than 370 Iraqi civilians and military — and 80 Iranian pilgrims — lost their lives in April, making it the bloodiest month since last September. On Wednesday, five car bombs exploded in a crowded market in Sadr City, Baghdad, killing 51 people and injuring 76. Three US soldiers were killed on Thursday and two more yesterday when a gunman in Iraqi army uniform opened fire near Mosul.

Broadly speaking, this is the result of a missed opportunity.  The point of the surge was to provide “breathing space” for political reconciliation, but Nouri al-Maliki, for reasons that are ultimately unknowable, either couldn’t or wouldn’t take advantage of it.  In Anbar, the Sunni tribes acquired political power and the Awakening is still a going concern.  In Baghdad, they were shut out, and violence is on the rise.

It’s not clear to me that there’s anything the United States can do about this.  It’s true that George Bush’s open-ended commitment to Iraq probably reduced the pressure on Maliki to make concessions to the Sunnis — after all, why bother if the Americans are going to be around forever to protect you? — but aside from that Petraeus and Crocker and the rest of the Bush team worked pretty hard to press Maliki into coming up with a political settlement that was broadly agreeable to all.  He didn’t.  American influence just wasn’t enough to make a difference then, and it probably isn’t now.  This is still, at root, a political problem, not a military one.  It’s up to Maliki to solve it, not the U.S. Army.