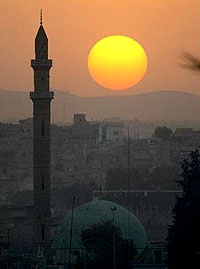 The New York Times reports that the June 30 deadline to remove all U.S. combat troops from Iraqi cities may get watered down a bit:

The United States and Iraq will begin negotiating possible exceptions to the June 30 deadline for withdrawing American combat troops from Iraqi cities, focusing on the troubled northern city of Mosul, according to military officials. Some parts of Baghdad also will still have combat troops.

….The spokesman for the Iraqi military, Maj. Gen. Muhammad al-Askari, who is also the secretary to the committee’s Iraqi contingent, said also that a decision on Mosul would be made at Monday’s meeting, which he called “critical.”

“I personally think even in Mosul there will be no American forces in the city, but that’s a decision for the Iraqi government and the Iraqi prime minister,” General Askari said.

General [David] Perkins also expressed specific concerns about Mosul, noting how important the city is to Al Qaeda in Mesopotamia, the homegrown group that American intelligence officials say is led by foreigners.

“For Al Qaeda to win, they have to take Baghdad. To survive they have to hold on to Mosul,” he said. “Mosul is sort of their last area where they have some maybe at least passive support.”

I don’t really feel like panicking at the moment about whether this is the camel’s nose that keeps us in Iraq forever, but June 30 sure seems like the perfect opportunity to stop screwing around and make it clear that we’re going to do what we said we were going to do.  At every step of this process, there are going to be enormous forces pushing in the direction of staying in Iraq for just a little bit longer, or in just a few more places, or with just a few more missions, and if we start giving in to them it’s going to be hard to stop.  We’ve got a plan and a schedule.  Let’s stick with it.