Life in the Golden State: 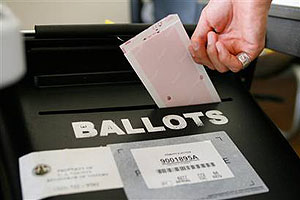 Now, with the state struggling financially, they’re being asked to do some ballot box demolition.

State lawmakers fighting to escape a riptide of budgetary red ink have two propositions on the May 19 special election ballot that would yank more than $2 billion from a pair of popular programs that help some of the state’s most vulnerable: young children and the mentally ill.

This is one of the reasons I loathe the initiative process these days.  Take Proposition 1E.  It asks me if I’d like to temporarily transfer some funds earmarked for mental health services to the general fund.  The amount at stake is a little over $200 million per year.

This is ridiculous.  I have no idea if this is a good idea or not, and for a trivial sum like this I’m not about to spend hours poring over ballot arguments.  It’s like having a municipal initiative here in Irvine to decide if we want to plant a new tree in front of city hall.  But year after year, we keep passing these absurd initiatives because, after all, they’re all for a good cause.  Education!  Mental health!  Children’s hospitals!  Bullet trains!

Bah.  This is why we elect a legislature.  Unfortunately, thanks to some even earlier initiative nonsense, the California legislature is unable to actually pass a budget during a recession.  Our current pile of six initiatives (1A through 1F, for some reason or another) is on the ballot solely because one (!) member of the state senate extorted them as the price for his vote on a compromise bill to raise some taxes and cut some spending a couple of months ago.  So now we have a special election, at a cost of God knows what, so that the good people of California can decide, among other things, whether to move 0.2% of the state budget from one account to another.