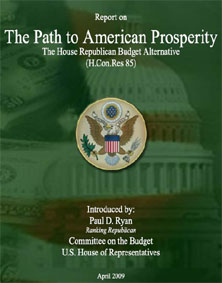 I won’t even pretend that I understand most of the alternative budget unveiled today by House Republicans.  The gist of it, however, is the classic, time-tested approach taken by “fiscal conservatives” who are too gutless to propose actual, concrete spending cuts: an across-the-board spending freeze.  (Except for the Pentagon, natch, because they’re such paragons of efficient procurement.)  That way they can release a 53-page document without taking the political risk of naming an actual program that will get cut.

Even by those standards, though, the section on Social Security is a masterpiece.  Here’s the nut of their proposal:

Without reform, [the Social Security] Trust Fund will reach exhaustion in 2041; as a result, future retirees face across-the-board benefit cuts of up to 22 percent in that year….To head off these severe consequences, the budget creates a trigger in Social Security to help extend the program’s viability….The recommendation includes:

• Reducing the 15-percent Primary Insurance Amount bracket by 0.25 percentage points per year, from the date at which SSA finds it cannot meet scheduled benefits within 5 years

• Phasing in the proposal. Because the Trust Fund currently is expected to reach exhaustion by 2041, this provision would not arise until 2036. It would not affect those at or near retirement, and no savings in Social Security are assumed in the budget.

That’s it?  Seriously?  They claim Social Security is going bankrupt and their proposal is to reduce PIA by 0.25% per year starting in 2036?  This takes gutlessness to a whole new level.

Later on, it turns out, they drop the mask and admit that this is nothing more than a proposal designed to “begin a process” that will eventually “move toward a consensus for saving and strengthening Social Security.”  That’s all very New-Agey, but what happened to hard-nosed fiscal rectitude?  Where are the private accounts, the means testing, and the increased age requirements?  Why aren’t Republicans standing tall and sticking to their conservative roots on this stuff?  Where’s the conviction, guys?

In other news, the Republican budget also proposes privatizing Medicare and putting in place a bunch of tax cuts for the rich, including (of course) temporary elimination of the capital gains tax.  That’s bold, innovative thinking.  I’m sure Rush and Sean will be drooling.