The Washington Post reports on a new study about the fantastic efficiency of K Street lobbying:

In a remarkable illustration of the power of lobbying in Washington, a study released last week found that a single tax break in 2004 earned companies $220 for every dollar they spent on the issue — a 22,000 percent rate of return on their investment.

The study by researchers at the University of Kansas underscores the central reason that lobbying has become a $3 billion-a-year industry in Washington: It pays. The $787 billion stimulus act and major spending proposals have ratcheted up the lobbying frenzy further this year, even as President Obama and public-interest groups press for sharper restrictions on the practice.

The paper by three Kansas professors examined the impact of a one-time tax break approved by Congress in 2004 that allowed multinational corporations to “repatriate” profits earned overseas….The researchers calculated an average rate of return of 22,000 percent for those companies that helped lobby for the tax break. Eli Lilly, for example, reported in disclosure documents that it spent $8.5 million in 2003 and 2004 to lobby for the provision — and eventually gained tax savings of more than $2 billion. 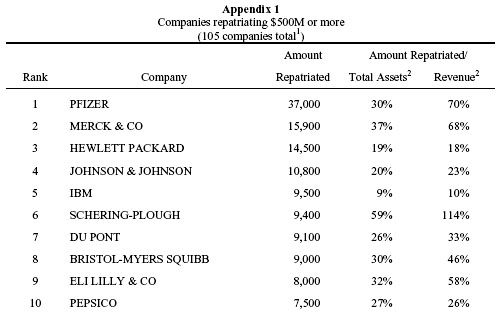 Honesty compels me to to point out that this research overstates the value of lobbying by choosing only a single, particularly lucrative tax break to examine.  The overall return on lobbying investment for business interests is probably no more than, oh, three or four thousand percent.  Hardly worth getting in a lather about, really.  Please go about your business, citizens.