Matt Yglesias passes along an email from a reader:

One interesting thing about how much Fox news and friends are covering these tea parties is that it’s illustrative how much conservatism has been transformed from a political movement into an entertainment demographic. Political movements, I would think, are defined by a common set of semi-coherent policies and proposals that movement sympathizers hope to see implemented by government. Entertainment demographics are defined by shared tastes or predilections that media companies can target for ratings.

Actually, doesn’t this apply to all politics these days?  Bob Somerby has been on a tear recently against the snark-based lefty shows on MSNBC hosted by Keith Olbermann and Rachel Maddow, for example, and although I don’t buy his entire argument, he does have a point. 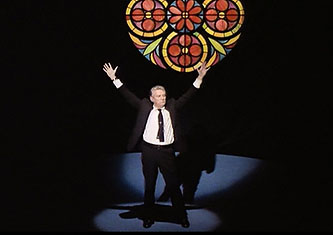 Unfortunately, this is just the way things are.  An old saying says that politics is  show business for ugly people, but in the past this mainly meant that politicians themselves were showmen at heart.  Today, though, with the rise of Rush Limbaugh and Crossfire and CSPAN and Fox News and Drudge and Politico and Jon Stewart and now MSNBC, the entire enterprise is thoroughly infused with the ethos of Hollywood.  Like it or not, liberals had to get with the program or die.

I guess about zero.  After all, it’s a better way of making money.  Paddy Chayefsky was right all along.