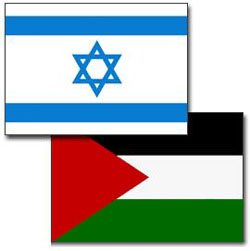 “In the next four years there is going to be a permanent status arrangement between Israel and the Palestinians on the basis of two states for two peoples, and it doesn’t matter to us at all who is prime minister.”

He also said that the United States will exert pressure to see that deal is put into place. “Any treatment of the Iranian nuclear problem will be contingent upon progress in the negotiations and an Israeli withdrawal from West Bank territory,” the paper reports Emanuel as saying.

….So far neither the White House or the Israeli government has commented on the report which, it should be noted, comes from Shimon Shiffer, one of Israel’s most highly respected journalists.

Seriously?  Rahm Emanuel said that?  We’re going to somehow put in place a two-state solution whether the Israeli government likes it or not?  And to make it happen, we’re going to make negotiations on Iran’s nukes contingent on Israel playing ball?

That would certainly be a change of policy from the United States, wouldn’t it?  But I’ll bet it turns out this isn’t quite what Emanuel said.  Probably best to hold off on comment until we hear a little more about this.