Suppose Congress passed a bill that gave you a tax credit if you mixed in some alternative fuels — ethanol or biodiesel, say — with your ordinary gasoline.  That’s actually a dumb idea, probably, but at least it’s pretty understandable.  In theory, the alternative fuel is greener than the fossil stuff, so creating the mixture is good for the environment and the government should encourage its use.

But what if there were an industry that already used a 100% alternative biofuel?  Could they qualify for the tax credit by mixing in some fossil fuel?  Obviously that’s not what Congress intended, but hey — a mixture is a mixture.  The law doesn’t say how you have to get there because it never occurred to lawmakers that anyone would do it this way. 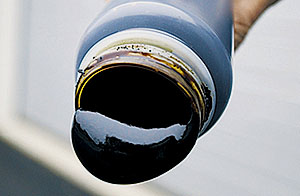 But this is America!  Of course there’s someone who will do this.  The paper industry, it turns out, depends on an elegant process in which wood pulp is separated into cellulose fiber and a sludge called “black liquor,” which is then used to generate energy for the process.  Neat.  Chris Hayes explains what happened next:

By adding diesel fuel to the black liquor, paper companies produce a mixture that qualifies for the mixed-fuel tax credit, allowing them to burn “black liquor into gold,” as a JPMorgan report put it….In fact, the money to be gained from exploiting the tax credit so dwarfs the money to be made in making paper — IP lost $452 million in the fourth quarter of 2008 alone — that the ultimate result of the credit will likely be to push paper prices down as mills churn at full capacity in order to grab as much money from the IRS as it can.

If there’s a cloud hanging over the elation in the industry, it’s the sneaking suspicion that once Congress gets wind of this racket, it will shut it down. “The one comment I do get from people [in the paper industry],” says [Brian] McClay, “is whether it’s going to be rescinded or redrawn before the end game.

….So far, though, to the surprise of McClay and others, there’s been not a peep from Capitol Hill.

This is American ingenuity at work.  You’d only be making a mistake if you thought it was anything unusual.  In fact, this kind of tax engineering is so commonplace that the spokesperson for International Paper doesn’t even see the need to defend it.  “It is what it is,” she shrugged when Chris called for comment.  And indeed it is.