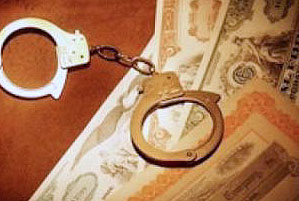 When it comes to lobbying and campaign finance, the old saw is that the real scandal is what’s legal.  That’s pretty much the way I feel about Wall Street too these days.  Still, there’s also the good old-fashioned illegal stuff:

In the first major disclosure of corruption in the $750-billion financial bailout program, federal investigators said Monday they have opened 20 criminal probes into possible securities fraud, tax violations, insider trading and other crimes.

….The report said little about who is under investigation and how the fraudulent schemes work, but investigators are already on alert for a long list of potential scams. Such schemes could include obtaining bailout money under false pretenses, bilking the government with phony mortgage modifications, and cheating on taxes with fraudulent filings.

Neil Barofsky, the special inspector general overseeing the bailout program, says fraud is likely to get even worse in the newest stage of the bailout since it allows investors to get in on the action with only a small bit of their own money at trisk.  The Treasury, in response to Barofsky’s report, said his recommendations would be “considered.”  How heartening.