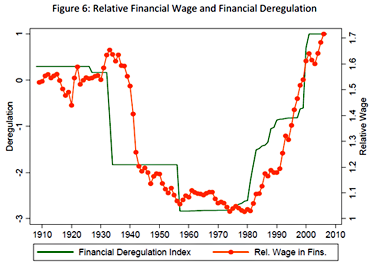 Via Paul Krugman, this comes from a recent paper by Thomas Philippon and Ariell Reshef.  Basically, they created a metric of financial regulation and graphed it against the relative pay of people in the finance industry.  Guess what?  When the market is lightly regulated, pay skyrockets!

Now, sure, a lot of other stuff was going on during this period too, so take this with a grain of salt.  But still: the amount of money being shoveled into the FIRE sector over the past 30 years has been pretty phenomenal, and it’s hardly a stretch to think that that’s pretty tightly correlated with loose regulation, massive leverage, and opaque rocket science derivatives.

What’s more, as Krugman points out, the amount of money going into finance has been so stratospheric lately that it actually has a significant impact on overall income inequality.  It’s only a part of the story, but it’s still a part.  One of the reasons there’s been less money for the middle class, thus spurring ever greater indebtedness in order to keep living standards on the rise, is because our financial titans kept so much of it for themselves.  It’s time for that to stop.  Finance should be the servant of industry, not its master.