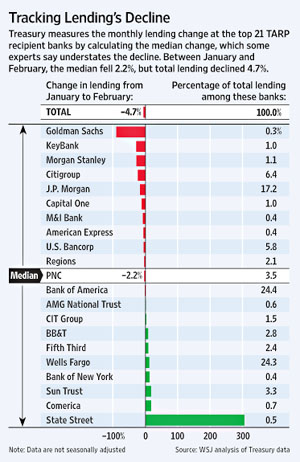 A few days ago, when I read that bank lending had dropped 2.2% in February, I didn’t think too much of it.  In fact, it didn’t really sound all that bad.  Given that we’re in the middle of a serious recession, a decrease of 2.2% seemed like it might be reasonable even if there were no bank crisis at all.

But I wasn’t reading closely enough.  First: this is not a year-on-year decline.  It’s a one-month decline, which annualizes to about 30%.  Second: that number is a median.  Total lending decreased 4.7%.  Third, it’s an average, and some banks cut back a lot more than others.  The Wall Street Journal reports:

According to a Wall Street Journal analysis of Treasury Department data, the biggest recipients of taxpayer aid made or refinanced 23% less in new loans in February, the latest available data, than in October, the month the Treasury kicked off the Troubled Asset Relief Program.

….In February, nearly half of lending by the 21 banks was to consumers, up from about one-quarter in October. But excluding mortgage refinancings, consumer lending dropped by about one-third between October and February. Commercial lending slumped by about 40% over that period, the data indicates.

That’s a big drop, even for the middle of a recession.  What’s more, as the Journal’s chart shows, some of the biggest drops came from Citigroup and JPMorgan, both recipients of big TARP bailouts.  Even with all that TARP money, they’re apparently not capitalized well enough to keep lending at a healthy level — which means that far from being able to pay back their TARP dough, they might very well need even more.  Pat Garofalo at the Wonk Room:

If a bank is truly healthy and can pay back TARP money while maintaining lending, more power to it. If, however, a bank is paying back TARP because it wants to get out from under the program’s restrictions — while not lending and clinging to other government funded rescue programs — that’s problematic.

For instance, Wells Fargo (which received TARP money) has posted a profit and maintained lending. If it announces a desire to exit TARP, the administration should seriously consider the offer. However, this is going to make it transparently obvious which banks are in the best shape. The administration will then have to decide whether the others will ever be anything more than zombies — limping along thanks to government support without actually doing any good — and be honest about the need to take them over and wind them down.