The Waxman-Markey climate bill was released yesterday, and if Joe Romm gives it a B+ I’m loathe to be pessimistic about it.  But I am.  It’s true that the bill’s targets for CO2 reduction are a little more aggressive than the ones Barack Obama campaigned on, but it also includes two provisions that are pretty discouraging.  First, their cap-and-trade program allows a lot of offsets: two billion tons in all, which allows companies to pollute away as long as they “offset” their carbon emissions somewhere else.  In theory, this is fine, but in practice it’s an invitation to abuse, substituting purely fictional reductions for real ones.  Second, it allocates a portion of the emission credits directly to affected industries instead of auctioning 100% of them.  This is yet another invitation to abuse.

It’s possible, of course, that both of these things can be beaten into submission with the proper oversight and regulation.  But what are the odds?  Ezra Klein anticipates my reaction here:

What concerns me is that it’s not clear how it gets better. Waxman and Markey probably represent the leftmost edge of the possible. They’re aggressively liberal, terrifically informed legislators who get the moral urgency of climate change 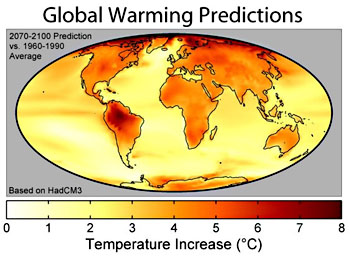 and possess the intellectual firepower to grasp the necessary scale of the response. If this is as far as they felt able to go on an opening bid, it’s hard to see the legislative pathway that strengthens, rather than weakens, the legislation.

A bill that started out with no offsets and no allocation might eventually end up with offsets and allocation.  But what happens to a bill that caves in on these issues right at the start?  It gets even worse as it wends its way through the sausage factory, that’s what.

As Ezra says, Markey and Waxman are as good as they come on this stuff, and if they don’t believe that a clean bill stands a chance even as an opening bid, they’re probably right.  And God knows, making the perfect the enemy of the good and getting nothing done at all is practically a liberal art form.  Passing this bill in some form or another is certainly way better than passing nothing.

But still.  It’s hard not to be a little let down by this.  If this is the best we can do, Bangladesh better get used to being a permanent swamp.

UPDATE: Dave Roberts notes that this is a b-i-i-i-i-g bill, combining a potentially unpopular cap-and-trade program with a tremendous amount of other stuff: “The fact is, doing these pieces separately would mean three, four, possibly five bruising legislative battles, culminating in a battle over cap-and-trade that, in my estimation, simply can’t be won on its own in this Senate….So they’ve decided, uncharacteristically for Democrats, to double down. They are piling all this stuff into one big-ticket, high-profile, must-pass bill….There is now a single point of focus, a put-up-or-shut-up moment. Anyone who wants to transition to a green economy or get the country off foreign oil or prevent global warming knows what to get behind. If nothing else, there will be no doubt by next year whether we’re serious about this sh*t.”

True, that.  My reservations aside, this bill is the best thing we’ve seen on the energy front in a long, long time.  I just wish it were even better, that’s all.  A guy can dream, can’t he?