Here’s an odd new twist on the AIG situation.  ABC News has gotten hold of a memo AIG wrote a few days ago arguing that the Treasury needed to provide it with additional bailout funds because a failure of the company “would cause turmoil in the U.S. economy and global markets, and have multiple and potentially catastrophic unforeseen consequences.”

No surprise there.  It might even be true.  But what’s odd is where they say the problem is centered.  Not in AIG’s high-flying CDS business, with all those counterparties demanding their billions of dollars in payouts, but in the stodgy old life insurance business:

The systemic risk is principally centered in the “life insurance” business because it is this subsector that has the greatest variety of investments and obligations that are subject to loss of value of the underlying investments….Over the past decade, the voluntary termination rate on individual policies declined remarkably (to six percent by 2007) as consumers could obtain liquidity from numerous other sources. 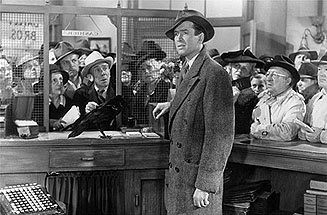 A significant rise in surrender rates — inspired by consumers’ needs for cash or because of rumored or real failure of insurance companies — could be disastrous. Because of widespread loss of liquidity, the industry would struggle to raise adequate cash to meet surrender requests. A “run on the bank” in the life and retirement business would have sweeping impacts across the economy in the U.S….State insurance guarantee funds would be quickly dissipated, leading to even greater runs on the insurance industry.

The claim here is that a weak economy has already left strapped consumers with fewer places to obtain traditional loans, which in turn means that people are increasingly likely to cash in their life insurance policies in order to scrounge up a bit of ready cash.  That’s bad enough, but if AIG were to fail — or if there were even a rumor of failure — everyone would start lining up to cash in their policies at once.  This would cause a panic and customers of other insurance companies would start lining up too.  Since reserves aren’t big enough to pay off everyone at once, this would cause massive, cascading failures in the entire life insurance business.

There’s plenty more in the memo about the global catastrophe that would accompany an AIG failure, but it’s mainly in bullet points and doesn’t provide much backup for their claims.  So I don’t have any good way to judge whether or not it’s true.

But the life insurance claim is a new one on me, so I thought it was worth passing along.  I’ll be very interested indeed to hear the reaction to AIG’s “run on the bank” claim from people with experience in the business.