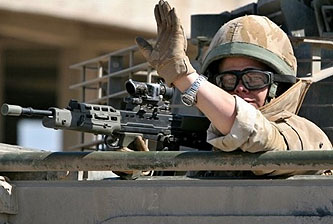 We are finally starting to get out of Iraq:

The U.S. will reduce its military presence in Iraq by 12,000 troops over the next six months as part of the first major drawdown since President Obama announced his plan to end combat operations in the country next year, U.S. military officials in Baghdad said Sunday.

….The plan calls for the number of U.S. Brigade Combat Teams to drop from 14 to 12. Two brigade teams that had been scheduled to redeploy in the next six months will not be replaced. A British brigade will also leave Iraq without being replaced, taking the final British combat troops out of Iraq.

When the American move is completed, it would reduce the U.S. military presence in Iraq to about 128,000 troops, dipping for the first time below the number of troops in the country before then-President Bush ordered the buildup he referred to as the “surge” in 2007.

It’s only a start.  And it’s not a big one.  But it’s still an important milestone as well as the partial fulfillment of a campaign promise, and I didn’t want it to pass without at least noting it.