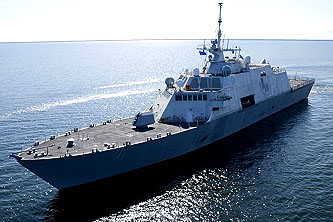 Only Nixon could go to China, and maybe only a Republican Defense Secretary can make serious cuts in big-ticket weapons systems.  Bob Gates has been rumored to favor axing some major platforms for quite a while, and the Boston Globe reports today that he’s serious about it:

Two defense officials who were not authorized to speak publicly said Gates will announce up to a half-dozen major weapons cancellations later this month. Candidates include a new Navy destroyer, the Air Force’s F-22 fighter jet, and Army ground-combat vehicles, the officials said.

More cuts are planned for later this year after a review that could lead to reductions in programs such as aircraft carriers and nuclear arms, the officials said.

….Gates’s budget plans remain closely guarded, but aides say his decisions will be guided by the time he has spent with soldiers in Iraq and Afghanistan.

One aide who has traveled with Gates more than a dozen times said the secretary “is particularly keen and aware of the urgent operational needs on the ground.”  That likely means greater investments in intelligence-gathering systems such as pilotless drone aircraft, special-operations forces and equipment, and advanced cultural training for military personnel, aides said.

Obviously we’ve heard this all before, and there’s no telling if Gates and Obama will be able to fight and win this battle.  They don’t call it the Iron Triangle for nothing, after all, and a fight like this will suck down political capital faster than a dozen stimulus bills.

On the other hand, it looks as if Gates is carefully taking away equal numbers of toys from the Army, Navy, and Air Force, and it’s possible that the stuff he wants to replace them with will be fairly evenly split too.  That may make his job easier.  Maybe.