….The minute the Treasury plan is put into action, we’ll have a lot of public price discovery for the banks’ bad assets. And if the prices don’t clear — if the minimum price the banks 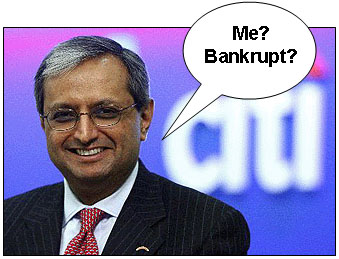 will accept is higher than the maximum price that the public-private partnerships are willing to pay — then no one will any longer be able to perpetuate the fiction that America’s banks are solvent.

….The big hope of the Treasury plan is that the private sector will be willing to pay a higher price for leveraged assets than it would for unleveraged assets….During boom years, that was a wager that many investors were willing to take. But now? I’m not sure. Chalk it up as yet another thing-which-has-to-go-right in order for this scheme to work. There are far too many of those for comfort.

Um, how is this a bad thing?  Isn’t a whole bunch of very public price discovery exactly what we want?  Then we get to find out for sure whether banks are solvent, as they claim, or irredeemably underwater, as a lot of us suspect.  Right now they can lie about their books and no one can really prove them right or wrong.  After these auctions, though, smoke and mirrors will be a lot harder.

I don’t have any more insight than anyone else about whether this is a deliberate part of Geithner’s plan.  Oddly enough, though, his tongue-tied interviews about it make me suspect that it might be.  Geithner might not be the most silver-tongued spokesman in the Obama orbit, but he’s not a doofus.  If he’s having trouble explaining the plan in public, one reason might be that he’s unable to fess up to the central pillar of the whole thing: forcing banks to put up or shut up.

Somebody is wrong about all this stuff, after all.  Either the critics are wrong, and banks are actually perfectly solvent, or else the banks are wrong, and all their memos about how they’re practically sagging under the weight of all their Tier 1 capital are just a bunch of hooey.  Geithner’s plan goes at least part of the way to figuring this out.