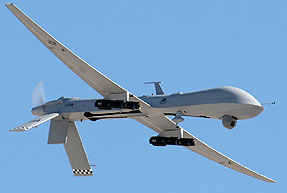 Greg Miller of the the LA Times reports that the CIA says its stepped up Predator attacks in Pakistan have been enormously successful:

An intense, six-month campaign of Predator strikes in Pakistan has taken such a toll on Al Qaeda that militants have begun turning violently on one another out of confusion and distrust, U.S. intelligence and counter-terrorism officials say.

….The stepped-up Predator campaign has killed at least nine senior Al Qaeda leaders and dozens of lower-ranking operatives, in what U.S. officials described as the most serious disruption of the terrorist network since 2001.

….The effect was immediate….CIA officials had suspected that their targets were being tipped by Pakistani intelligence to pending U.S. strikes; bypassing the government ended that concern.  It also eliminated delays. Former CIA officials said getting permission from Pakistani authorities could take a day or more, sometimes causing the agency to lose track of the target.

I find this pretty believable.  There’s really not much question that there are plenty of high-level ISI operatives who are sympathetic to al-Qaeda and likely to tip them off to upcoming attacks.  And as the article mentions, the Pakistani government knows this perfectly well.  Its objections to the drone attacks have been decidedly pro forma.

But even if this is all true, it’s still not clear that the short-term success of the Predator program outweighs its long-term potential for blowback.  For now, though, I’ll let smarter people than me try to figure that out.