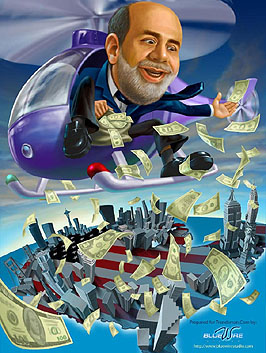 Ben Bernanke has long said that even with interest rates near zero, the Fed still has plenty of monetary ammunition left to stimulate the economy.  Today he put his money where his mouth is and announced that the Fed would be buying up a trillion bucks worth of treasury bills and mortgage securities.  This is known as quantitative easing, aka printing money.  The Wall Street Journal rounds up some reaction:

Guy LeBas of Janney Montgomery Scott provides the basics: “Even today’s announcement that the Federal Reserve plans on purchasing everything in America that isn’t nailed down raised relatively few eyebrows on our end….Effectively, the Fed is monetizing the Treasury’s debt, a strategy that appears in the encyclopedia under the heading ‘how to trigger inflation.’ “

David Greenlaw of Morgan Stanley says the purchase of mortgage securities is designed to drive down interest rates: “In 2008, the average mortgage rate on the outstanding stock of loans was about 6.50%. So, if the Fed brings 30-yr fixed rate mortgages down to 4.50% and all homeowners are able refi, the aggregate permanent cash flow savings would be on the order of $200 billion per year.”

Paul Dales of Capital Economics isn’t sure that $300 billion of Treasury purchases is enough: “This could just be the opening salvo….Overall, no one knows whether these measures will work. Much depends on whether banks loan out the cash they raise from selling Treasuries and whether households and businesses spend, rather than save, any extra borrowing….At the least, no one can say that the Fed isn’t trying.”

So there you have it.  $300 billion in new money, another $200 billion over time from lower mortgage rates, and a clear message that the threat of deflation is being taken seriously.

That’s what the adults were up to, anyway.  Back in make believe land, meanwhile, it was AIG bonus time 24/7.  Gotta keep Congress busy with something, I guess.