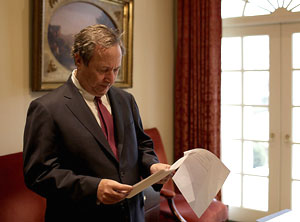 A few weeks ago, for example, they teamed up to keep Obama focused on the long-term deficit:

Meeting in January on the eighth floor of the transition team’s office in downtown Washington, Geithner pressed the incoming president to commit to cutting the deficit to 3 percent of the economy over the next five years, which would keep the nation’s debt roughly in line with normal economic growth. Summers quickly backed him.

Some, including economist Jared Bernstein, resisted, saying that such a strict limit would make it more difficult to confront the many challenges ahead and that the size of the government’s emergency response to the economy and financial markets would make the cap tough to maintain.

In February, the entire economic team convened in the windowless Roosevelt Room in the White House. Obama abruptly ended the debate. Geithner and Summers would have their way.

Tim Fernholz says “this doesn’t sound too good,” but I think that’s too quick a judgment.  Bernstein may have lost this battle, but he wasn’t shut out of the conversation, and in any case it’s a battle he probably deserved to lose.  The long-term deficit is important, both in substantive and optical terms.  Substantively it’s important because it’s related to the current account deficit, which eventually needs to start coming down.  We can’t keep borrowing from China forever.  And optically it’s important because Obama needs to appear fiscally responsible if he wants to achieve his long-term goals.  So far Republicans haven’t been able to make the “wasteful spending” charge stick, but if they ever get any traction with it the public is likely to start turning against Obama’s plans.  One way to keep that from happening is for him to take economic fundamentals seriously and to make sure the public knows he’s taking them seriously.

If the Bernstein faction starts to lose every battle, then that’s a problem.  But it’s only been a few weeks so far, and I suspect that he’s going to win a few on some other issues.  But Obama did the right thing this time.