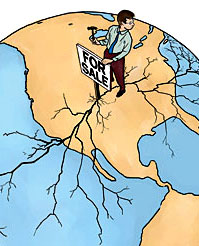 Indeed, I think our political system is actually fairly well-designed for short-term crises. The problem is long-term crises like global warming or health costs. As Peter Orszag wrote back on his CBO blog, “our political system doesn’t deal well with gradual, long-term problems” that require “trading off up-front costs in exchange for long-term benefits.” Few Congressmen want to raise taxes tomorrow to reduce carbon a decade from now. Lots of Congressmen don’t want the economy to collapse if they have to run for reelection next year. For that reason, I’m much more confident in the system’s ability to react agilely and seriously to the economic crisis than global warming. The economic crisis, after all, threatens their reelection. Incumbents often don’t survive depressions. Conversely, I think conventional wisdom is that it’s fixing global warming, rather than global warming itself, that poses the largest political threat to incumbent legislators.

I think that’s right.  In fact, I’d go further: not only can we respond fairly well to short-term crises, we actually have responded fairly well to the current economic meltdown.  There have been plenty of miscues and half measures along the way, but in the space of 18 months the Fed has created an alphabet soup of term lending facilities; Fannie Mae, Freddie Mac, and AIG have been nationalized; interest rates have been reduced to near zero; TARP was passed and hundreds of billions of dollars pumped into the banking system; the Fed has launched plans to rescue the commercial paper market, the money market, and the consumer loan market; FDIC insurance has been raised to $250,000; Detroit has been bailed out; and an $800 billion stimulus measure has been passed.  Some of these actions might have been late or misguided — it could hardly be otherwise considering the depth and freakishness of the financial implosion — but all things considered, the willingness of our political system to deal with this crisis hasn’t been all that bad.  If we could muster half this much energy, mistakes and all, on behalf of global warming I’d be ecstatic.