Should healthcare reform include a public option?  That is, even if most people continue to get their healthcare via private insurers, should they have the option of signing up with a public plan if they want to?

The argument in favor is fairly simple: it keeps private insurers honest.  If the free market really does produce efficiencies and lower costs, then private plans ought to be able to provide medical services for less than the bloated government bureaucracy that runs Medicare.  If it turns out they can’t, then they’ll go out of business.

The argument against, such as it is, is that a public option will….what?  Force doctors to accept lower payment by fiat, I guess.  Or compete unfairly in some way.  I’m not sure.  My own guess is that a public option would be a boon for private insurers.  They really don’t want to treat the sickest, costliest patients, after all, and even if they’re required to insure all comers they’ll still do everything they can to avoid taking them on.  That’s a whole lot easier if turning the hardest cases away merely means they sign up for Medicare rather than being left to die in the street. 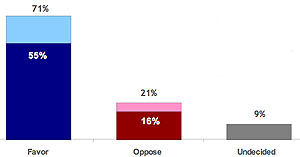 Anyway, it turns out the American public agrees.  In a recent survey, 71% said they favored “access to affordable, quality health care for all Americans even if it means a major role for the federal government.”  This held up even under a barrage of hostile questions.  Ezra Klein summarizes:

The poll was conducted by Lake Research Partners and it tests reactions to the public insurance option seven ways to Sunday. It asks whether the public insurance option “will have an unfair competitive advantage over private insurance because the government will set rules that favor the public plan” and suggests that “a new public health insurance plan will reimburse doctors and hospitals at much lower rates, causing many doctors and hospitals to shift higher costs onto people who buy private health insurance.” It dangles that “a public health insurance plan will be another big, government bureaucracy that will increase costs to taxpayers” and warns that it might “force people into lower quality care including long waiting times and rationing of care.”

The bad guys haven’t started up their PR blitz yet, of course, so this could all change.  But it’s an encouraging sign.