Perhaps unsurprisingly, I have never roused myself to understand the intricacies of the budget reconciliation process and the Byrd rule. 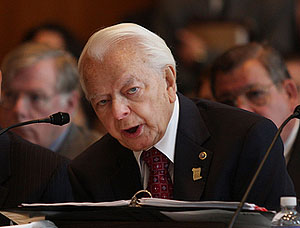 The reconciliation process is basically designed to eliminate Senate filibusters on budget resolutions, but it’s the Byrd rule that specifies what counts as a budget issue and what doesn’t. But who decides what the Byrd rule itself says?  Ezra Klein:

The Byrd rule allows senators to challenge the acceptability of any provision (undefined) of a reconciliation bill based on whether or not its effect on government revenues is “merely incidental” (undefined). Thus, if you enter reconciliation with a health-reform bill, it’s not clear what’s left after each and every provision — however that is defined — is challenged and a certain number of them are deleted altogether: the tax portions, certainly. And the government subsidies. But is regulating insurers “merely incidental” to government revenues? How about reforming hospital delivery systems? How about incentives for preventive treatment? Or the construction of a public plan? An individual mandate?

It’s hard to say. The ultimate decision is left up to the Senate parliamentarian, whose rulings are unpredictable. Under George W. Bush, Republicans managed to ram tax cuts, oil drilling, trade authority, and much else through reconciliation. But they were as often disappointed: The GOP leaders fired two successive Senate parliamentarians whose Byrd rule rulings angered them.

Ah, I see. The Senate parliamentarian will decide whether we get healthcare reform this year. That’s comforting to know. Perhaps Ezra’s next task should be an in-depth profile of Alan Frumin, apparently the people’s representative for all things healthcare related.