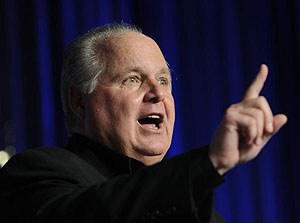 Rush Limbaugh is drawing some ridicule for saying, “One thing we can all do is stop assuming that the way to beat [the Democrats] is with better policy ideas.” But I think he’s basically right. Good ideas are meritorious. But being meritorious isn’t what wins elections. Most voters have only the faintest idea what policy ideas candidates advocate when running or implement when in office. External conditions (such as the economy, but war and scandal matter also) have much more influence over which party wins.

I agree — up to a point.  I do think that the GOP needs to moderate some of the hardcore social positions that have alienated young voters in droves, but aside from that it’s not shiny new ideas that will save them.  That’s not what saved Democrats, after all.  National health care?  That’s been on our wish list for about a century.  Fighting global warming?  Liberals  have been environmentalists since the 60s.  Fiscal stimulus?  Can you say “New Deal”?  Pulling out of Iraq?  Not exactly a milestone in progressive thought on foreign policy.

You can take this too far, of course.  Liberals might be longtime environmentalists, but global warming is a newish issue and a market-oriented cap-and-trade program is a newish way of dealing with it.  Our healthcare plans this time around are different (and frankly, more modest) than in the past.  Obama is pulling out of Iraq but getting us ever deeper into Aghanistan.

So: not new ideas, perhaps, but certainly different takes on classic ideas.  What’s more, Dems have also backed down on social issues a bit over the past decade, sometimes in fact (gun control), sometimes only rhetorically (abortion).  This is likely to eventually be the road back for Republicans too.  Cut down on the gay bashing and the hellfire preachers who are too often seen as forces of intolerance, and then come up with newish ways of selling small government and lots of overseas wars.  It’ll work someday.  Not anytime soon, but someday.