Ben Bernanke’s profile has been a little bit lower since Barack Obama took office, but today he testified before Congress and backed Obama’s aggressive spending plans: 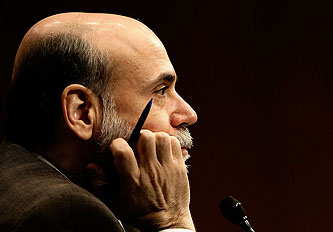 U.S. Federal Reserve Chairman Ben Bernanke on Tuesday appeared to back the White House’s efforts to stimulate the economy, saying aggressive action is needed now to avoid an economic calamity even as it adds trillions of dollars in new government debt.

….”By supporting public and private spending, the fiscal package should provide a boost to demand and production over the next two years as well as mitigate the overall loss of employment and income that would otherwise occur,” Mr. Bernanke said in prepared testimony to the Senate Budget Committee.

Basically, Bernanke had nothing good to say about our current mess.  Things are bad and getting worse.  Interestingly, however, he did have one slightly encouraging thing to say about the long-term deficit: he thinks it will be mitigated somewhat when we start selling off all the toxic waste that we’re buying up right now. “If all goes well,” he said, “the disposition of assets acquired by the Treasury in the process of stabilization will be a source of added revenue for the Treasury in the out years.”

If all goes well, that might be true.  I wonder what the odds are of all going well?