SPHERE OF INFLUENCE….In the LA Times, Megan Stack reports that Russia is playing both parts in a good-cop-bad-cop routine directed at the United States:

In recent days, Russian officials have rushed forward to offer logistical help to NATO troops in Afghanistan — at the same 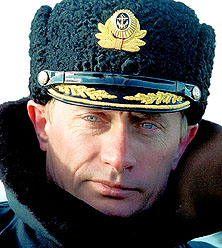 time dipping into a dwindling budget to offer impoverished Kyrgyzstan more than $2 billion in an apparent payoff for ejecting a U.S. military base crucial to the war against the Taliban.

In fact, Russia is tugged between two strong, conflicting impulses. It distrusts U.S. motives, especially when it comes to America’s penetration of former Soviet states. But Moscow’s sense of invulnerability appears shaken by falling oil prices and the precarious economy. Many analysts believe the Kremlin is looking for an opening to make nice with the West. Nearby Afghanistan, where instability also spells danger for Russia, presents a handy opening.

And so Russian officials offer help with one hand, lash out with the other.

….The message from Moscow these days appears to be that the United States should not expect to cut deals with the Kremlin-backed governments of Central Asia. If Obama wants something from the region, he’ll have to ask Moscow.

The key question seems to be: how scared is Putin of Islamic extremism near Russia’s border?  And how badly do we want Russian help?  Stay tuned.