OL’ BLUE EYES…In the LA Times today, Allen Goldberg worries that genetic screening for inherited diseases is being corrupted to “satisfy the whims of parents”: 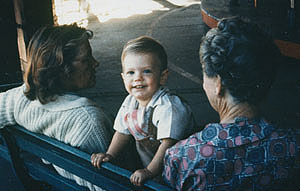 Recently, the Los Angeles-based Fertility Institutes announced that it would soon be offering patients at its clinics the chance to choose traits such as “eye color, hair color and complexion.” The clinics already offer gender selection to patients undergoing in vitro fertilization.

The Fertility Institutes employs a technique known as “preimplantation genetic diagnosis,” which allows doctors to screen embryos soon after they are created in a petri dish and implant only the ones that meet certain criteria. The technique was invented to help high-risk families avoid or manage potentially deadly genetic traits, and to help women who’ve had multiple miscarriages conceive babies they can carry to term.

Now the Fertility Institutes is corrupting this lifesaving clinical procedure by using it to help families create designer babies, and I worry that their excesses will turn public sentiment against all preimplantation genetic diagnosis. That would be wrong.

I confess that this particular controversy has always perplexed me.  If, for religious reasons, you flatly oppose the creation and destruction of embryos, then I disagree with you but I understand your objection.  Outside of that, though, who cares if parents start selecting for left-handed saxophone players with a gift for languages?  It’s true that as the technology progresses, it will probably become possible to perform more problematic types of screening — perhaps for behavioral traits like sexual orientation or political persuasion — but there’s every reason to think that this is a lot harder than it sounds no matter how good the technology gets.  And in any case, parents already select for these traits constantly when they make decisions about how and where to raise their children, and nobody objects to that.

Like every other medical procedure, this one will eventually be bound up in a rigid code of ethics that will be the end result of the usual messy political process.  And there will always be a few parents willing to fly to Burma or Albania or wherever to get treatments they can’t get at home.  If that becomes a big problem 30 years from now, we can deal with it then.  In the meantime, if you’ve always wanted a blue-eyed kid (and we blue-eyed kids are pretty adorable), then go ahead and have a blue-eyed kid.  It’s OK with me.