Should prisoners held at Bagram Air Base in Afghanistan have the right to file habeas corpus suits challenging their imprisonment?  Both the Bush and Obama administrations say no.  Hilzoy has a good post exploring the issues:

On the one hand, had anyone asked me in, say, 1991 whether Iraqi prisoners whom we were holding in Kuwait were entitled to file habeas petitions in US court, I would have said: of course not. They are entitled to lots of things, many of them detailed in the Geneva Conventions. But it would have seemed bizarre to me to suggest that they were entitled to habeas rights. 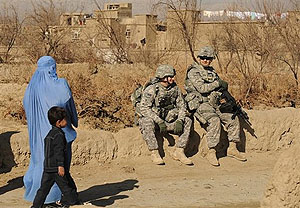 The problem is that not all the prisoners at Bagram were captured on a battlefield.  Some, like Amin Al Bakri, were abducted in Thailand and then flown to Bagram, and this makes it impossible to simply assume that everyone there is a POW:

It was neither me nor the federal courts that muddied the distinction between the jurisdictions of the federal and military courts, thereby making it impossible for the federal courts to simply defer to the military in these matters. It was the Bush administration. They were the ones who sent CIA agents all over the world kidnapping people, flew those people from places like Thailand into a war zone, and then turned around and said: heavens, you cannot scrutinize what we did — you’d be interfering with the conduct of the military in wartime!

Read the whole thing for a pretty good, nuanced discussion of the issues at hand.  This is a tough one to unwind.