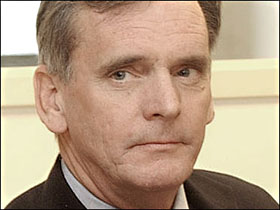 GREGG WITHDRAWS….I sure didn’t see this one coming:

President Obama’s choice for Commerce Secretary, Senator Judd Gregg, withdrew his nomination on Thursday. He said there were “irresolvable conflicts” between him and the administration.

“It has become apparent during this process that this will not work for me as I have found that on issues such as the stimulus package and the Census, there are irresolvable conflicts for me,” Mr. Gregg said in a statement. “Prior to accepting this post, we had discussed these and other potential differences, but unfortunately we did not adequately focus on these concerns. We are functioning from a different set of views on many critical items of policy.”

So that leaves the census.  Obama has decided to remove it from the Commerce Department and put it directly under the White House, something that’s recently become a right wing  cause célèbre.  “This isn’t a small or innocent change,” says Rep. Marsha Blackburn (R–Tenn.), and I suspect we’re going to be hearing a lot more about this soon from Limbaugh and Drudge and the rest of the usual suspects.  I hope Obama has a pretty good explanation for doing this.

UPDATE: Marc Ambinder says here that the census director still reports to Commerce and that the whole thing is a “BS issue.”  So I’m not quite sure what’s going on.  Fox News frames it this way:

White House officials have announced that the census will technically remain part of the Commerce Department, but that Chief of Staff Rahm Emanuel will oversee it at the White House, raising eyebrows among critics who say he can’t be expected to be neutral in the task.

More later as I figure out what’s really going on here.