Today’s theme is “Looking Skyward.”  On the left, Inkblot is reacting to a bird flying overhead.  On the right, Domino is bonding with a potted plant.

And speaking of birds flying overhead, the Guardian reports that 200 British cats are being outfitted with a device called “catnav” to track their predatory habits.  “Some experts believe Britain’s 9m cats could be killing more than 150m birds, mice, rabbits, moles and other creatures every year,” they warn us.  “We know what cats do in our homes — they sleep,” says one of the researchers, “But we have virtually no idea of what they get up to outdoors, particularly at night. Now we can find out.”

Well.  I’d just like to take this opportunity to quantify Inkblot and Domino’s contribution to this bird and mole carnage.  That would be zero.  Jasmine once dragged in an already wounded bird and allowed Inkblot to play with it, but neither Inkblot himself, nor our pudgy little Domino, is capable of anything more than dreaming about such things.  Domino, in fact, can barely find her own food bowl at times.  (Inkblot has no such difficulty.)  The Irvine pest population may rest easy. 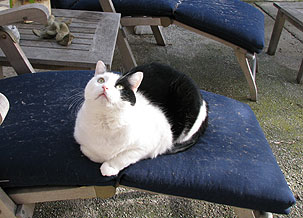 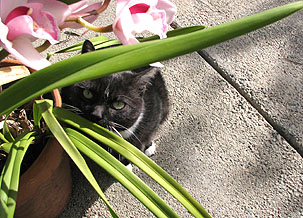